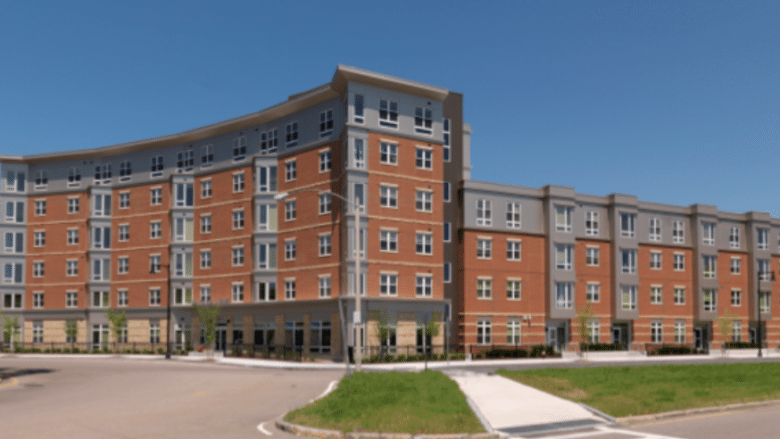 
Private housing is too expensive in American cities, public housing is ailing, and the way to fix the problem is to spend $70 billion over the next five years to improve government housing developments, several prominent Democrats said Monday.

Three members of Congress and Boston Mayor Marty Walsh made an appearance at a public housing development in South Boston now named for the mother of U.S. Representative Stephen Lynch, who said recent physical improvements there have raised the quality of life considerably.

Lynch joked about the resident of The Anne M. Lynch Homes at Old Colony who recently got caught illegally renting his apartment on Airbnb, saying it never would have happened when he was growing up because it was an undesirable place to be. He recalled his cousin getting shot to death across the street in 1996, and compared that incident with safety improvements in the neighborhood.

“There’s a nice vibe here, that the families are all connected and ‘we’re trying to watch out for each other.’ And that’s even in the midst of a difficult struggle, for many families,” Lynch said. “So every working family in this country deserves a safe place, and an affordable place, to live. If you put in a hard day’s work, every day, day in and day out, there’s no reason you should be struggling to put a roof over your head.

“There are too many families in this country today that work full time, even multiple jobs, and still can barely keep their head above water. There are a number of policies we should be pursuing in Washington to solve this problem, but we have to start with making sure that those families – our families – and especially their children have the same opportunities and better opportunities, to grow up in a safe community.”

During his remarks at the press conference Lynch stayed away from criticizing or even mentioning President Donald Trump. But his fellow Democrats, U.S. Senator Edward Markey (D-Malden) and U.S. Representative Hakeem Jeffries (D-New York), took aim at the Trump administration and the federal Department of Housing and Urban Development led by Secretary Ben Carson.

“The United States is facing an affordable housing crisis, and American families need relief now,” Markey said. “… Sadly, the budget proposals we have seen from President Trump would turn this crisis into a national disaster. In fiscal year 2019, President Trump has proposed to cut the Department of Housing and [Urban] Development by an astounding $8.8 billion.”

Markey said spending more money on public housing would help not only the residents of public housing, but also the country more broadly.

“While President Trump wants to push hardworking families over a cliff, Democrats will offer them a ladder to economically advance. Our plan is bold but it is also simple: Invest in public housing, because that is really an investment in our economy,” Markey said.

Jeffries, the co-chairman of the House Democratic Policy & Communications Committee, said the $70 billion would be used to repair and modernize existing public housing developments, making them handicapped-accessible and improving energy efficiency; to improve job training and educational offerings for residents; and to revitalize the neighborhoods surrounding public housing.

He heavily criticized the Trump administration.

“Donald Trump and HUD Secretary Ben Carson have proposed rent increases for low-income residents and working families that will force many to choose between putting food on the table, clothing on their back, or paying their rent. Those rent increases are heartless and inhumane. They are outrageous. They are unreasonable, unnecessary, and unjust,” Jeffries said, to applause. “‘Affordable housing’ means affordable. That’s not brain surgery, Dr. Carson. That’s just common sense.”

A spokesman for the U.S. Department of Housing and Urban Development could not immediately be reached for comment.

Walsh, who represented Dorchester in the state House of Representatives before he became mayor of Boston in 2014, offered a history lesson about public housing.

“People think public housing equals poverty. In reality, after World War II, the public housing partnership between cities and the federal government was actually a building block to the middle class,” Walsh said.

Today, he said, nearly 10 percent of Boston residents live in public housing or receive assistance from the Boston Housing Authority. Even though what a record number of housing units “at every income level” are being built, he said it’s not enough, and that public housing is vital.

“Like many cities, Boston is experiencing a housing shortage. It drives up rents. It drives up prices, and we feel it every single day. It’s probably the single greatest challenge that our families and our city faces. As we talk about the expansion of our city, and all these great companies coming into our city, we really need to make sure that our city stays so people that live and grew up here can stay here and live here,” Walsh said.

The mayor blamed federal divestment from public housing under the Trump administration for making a difficult problem worse.

The South Boston public housing development was originally known as the Old Colony Housing Project before being renamed after Lynch’s mother, Anne M. Lynch, in November 2016, several months after she died at age 91.

A portion of the press conference Monday, May 7 can be seen here.