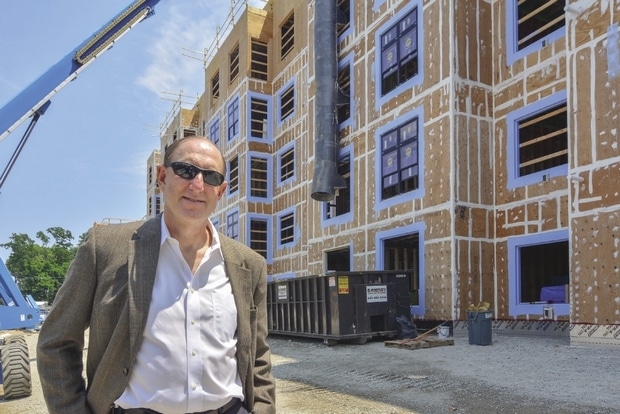 
MetroWest towns like Boxborough, Hopkinton, Southborough and Sudbury might never be considered exactly affordable – especially not these days, with Hopkinton the cheapest among those four with median home prices this year of $635,000.

But those towns are leading the way in MetroWest and much of the rest of the state in adding new housing units subsidized to be affordable for a typical working family.

In these communities and across Central Massachusetts, the rate of new subsidized housing units has sped up as the housing market has remained tight, outpacing the state average. Of the more than 3,000 deed-restricted affordable housing units added in Central Massachusetts in the past decade, nine out of 10 have hit the market in the past three years.

"It's great to be the world center for life sciences, it's fantastic," said State Rep. Carmine Gentile (D-Sudbury), who serves on the state's Joint Committee on Housing. "Massachusetts is a great place for business now, and a great place to live, but the lack of housing is really starting to cause problems."

Some cities and towns have changed zoning to better accommodate development. Few anywhere have been proactive as Littleton, whose location near the intersection of Route 2 and I-495 helps bring in newcomers.

Littleton has taken a take-charge attitude because it "wants to be the master of its affordable housing destiny," Town Administrator Keith Bergman said.

About five years ago, Littleton was forced to allow a dense residential development under the state's affordable housing law, Chapter 40B, because less than 10 percent of the town's housing stock was restricted by deed to be affordable. Town officials were convinced they should reach the 10-percent threshold in order to keep potentially unwanted projects at bay, Bergman said. That way, the town could better determine where projects go and what they look like.

"It's really been the policy approval of the Board of Selectmen and the Planning Board," Bergman said of the support for development-friendly zoning.

Littleton is determined to stay above a 10-percent threshold. In communities below that level, developers can override local zoning regulations – allowing them to build more densely – if at least one-fourth of the development's units are set aside for affordably priced units.

To avoid this, Littleton requires any new development of six units or more to have 10 percent of its units restricted for affordability.

Natick has taken the same step. One new development rising across from the Natick Mall is a 164-unit senior housing development called Avenu at Natick that will include 17 affordable units.

"It's really to keep pace," Ted Tye, a managing partner with Newton-based National Development, which is building Avenu at Natick, said of the town's bylaw. "Natick was very welcoming to us."

Requiring affordable units in a densely built town where home prices this year have averaged $595,000 has been the result of what Town Administrator Melissa Malone called Natick's welcoming attitude. The town has created an affordable housing trust from which it can draw funds to help create new units.

"It's the ethos of the community," Malone said, adding that adding new housing also requires careful planning. "We're at a crosspoint now with a great amount of growth, and we can't willy-nilly put units up without being thoughtful about how it affects transportation and schools and other places."

Central Massachusetts has outpaced the state in new affordable housing development in the past three years thanks largely to MetroWest communities. Boxborough, Hopkinton, Southborough, Sudbury and Westborough all cracked the 10-percent threshold for the first time within the last four years, and between them have added more than 1,300 affordable units in that time.

Thanks largely to those towns, Central Massachusetts increased its subsidized housing stock by 7.2 percent from 2014 to 2017, beating the statewide growth rate of 4.5 percent.

Still, Massachusetts still doesn't build as many new homes as it did in decades past, thanks to what builders and realtors say are high construction and labor costs and local zoning and regulations making it hard to even get a shovel in the ground. Despite a strong economy, the state has produced the 13th fewest new housing units per 1,000 residents in the nation from 2010 to 2016, according to the U.S. Census.

Only 14 of the Central Massachusetts' 85 cities and towns meet the 10-percent threshold for affordable units. Just as many communities have less than 2 percent. That lack of new housing production is having an effect.

Residential vacancy rates in Worcester County and statewide are half or less of what they should be, according to the Massachusetts Housing Partnership. The median single-family home sale this year in Massachusetts was up 5 percent to $365,100 through May, according to The Warren Group in Boston.

A push for more

Under the state's new Housing Choice Initiative, communities building a certain rate of new housing units or allowing denser development by special permit will be given preferential treatment for state capital funds for infrastructure, parks and conservation projects. The state will commit $10 million a year toward such incentives.

Central Massachusetts claims 17 of the state's 67 such communities.

The Housing Choice Initiative marks the latest major effort by the state to spur the creation of affordable homes. If the new program works by positive reinforcement, the older one somewhat punishes communities not taking action on new housing.

Chapter 40B allows developers to override local zoning regulations in communities not meeting the 10-percent affordability threshold. Affordable units are typically designated for people who make 80 percent or less of the area's median income, with price restrictions written into the property's deed.

More such efforts are needed to help bring more affordable housing to Massachusetts, according to those who work to bring more cheaper living options.

Clark Ziegler, the executive director of the Massachusetts Housing Partnership, a nonprofit working with the state to increase the affordable housing supply, said Massachusetts is hurt by its often restrictive zoning and regulations varying in each of its 351 cities and towns.

"We're very much an outlier in housing production," Ziegler said.

Massachusetts is one of only 10 states requiring a two-thirds vote by a town planning board to change zoning, he said, which can make communities not flexible enough to allow needed development.

If another step were to be added, Bill Minkle, the executive vice president of Worcester housing advocacy and management agency RCAP Solutions, said he'd like to see an education initiative to teach people of the need for affordable housing – and to dispel negative and often wrong assumptions about who lives in such units.

But Minkle called the Housing Choice Initiative a positive step and said 40B has been effective in adding mixed-income developments.

"It was a very good concept," he said, "and I think it's underutilized."